A list of things that we look forward to fulfilling and coming about, once we’ve hit our weight loss goals.

Most of these things are extremely poignant and emotional, like ridding ourselves of our medical issues and chronic pain.

We all have different reasons for beginning a path to wellness.

Reasons that we know will benefit the quality of our lives in the long run.

Reasons that are extremely profound, and will greatly affect the big picture of our every day existence.

And without putting too fine a point on it, these reasons are indeed the origin of Day 1 for most of us, and tend to provide us with our much needed initial motivations.

We all want to be healthy-

We all want to live our best lives-

And there is no doubt in my mind, that overall health is by far the most important benefit of weight loss.

A secondary list, that maybe we tend to keep to ourselves, because, let’s face it, some of the things on this particular list can seem superficial and frivolous at first glance.

Sometimes the things on this list can seem unimportant and of less value when stacked up against the heavy hitters on the primary list. But, in their own way, they can be just as victorious.

And it’s just as vital to have this other list-

Because having it enables us to lighten things up (no pun intended) and helps us to realize that there are definitely some “extra” rewards along this journey, that are an unexpected bonus!

Of course, I wanted to lose weight so that my diabetes would go away, and I could stop sticking myself with needles….

And, so my super sexy sleep apnea machine would go back in the closet (every time I put that thing on I felt like a Top Gun fighter pilot heading into “the danger zone”)….

And, so my doctor would stop looking at me with a furrowed brow in regards to my high blood pressure and my elevated cholesterol levels.

And, so I could stop grimacing with crippling foot and knee pain….

And. so I could stop breathing like I was being suffocated from the inside out while simply walking across a room.

I also, really wanted to sit comfortably in an airplane seat without using a seat belt extender.

I wanted to go on a carnival ride with my son and not have to get off because we couldn’t fit in the seat together.

I wanted to go to a restaurant and sit in a booth, and not have to ask to be moved to a table, because I couldn’t squeeze my gut in between without it cutting off my air supply.

I wanted to finally enjoy shopping….

I wanted to wear clothes that I actually liked, and not just the ones that were available in a 5X.

And I really wanted to rock a pair of jeans.

I wanted to dance with reckless abandon, and not feel self-conscious.

I wanted to be happy when my picture was taken, and not spend all of my time doing damage control, and begging people to please not post them or tag me.

I wanted to be able to take a real compliment without feeling like it was forced and insincere.

After an embarrassing incident at a Renaissance Faire involving me trying to buy a corset (while I was at my heaviest weight), I had all but abandoned the idea of ever finding one that I felt was flattering.

The poor woman had felt bad for me after the initial struggle of trying to squeeze me into the one I wanted to buy, and had offered to custom make one for me in a plus size for an extra charge (because of all of the additional fabric).

And by the time she had measured me and scrutinized me like a prized heifer at the state fair (while trying in vain to be polite), she calculated the somewhat inflated price, and I had been too hopeful and embarrassed to back out.

When it finally arrived, I unpacked it with vigorous excitement….

And it was hideous.

I felt like a giant sausage squeezed into a tube sock. I had only worn it once, and I never liked how it looked on me.

So after I hit my goal, I was determined to go back to that Renaissance Festival to get a new one.

I wanted to walk in there like it was no big deal, and just purchase THE one….and then go party like it was 1399!

I remember looking at it when she handed it to me, and thinking “That thing looks soooo tiny. There is no way that’s going to fit around my waist.”

And it felt soooooo good.

I never thought that something that tight and constrictive could feel that freeing.

Ironic I suppose, when you think about it.

But in the grand scheme of things…..

Because every victory is important.

Every victory is win.

The big ones, the small ones, and all of the ones in between.

Because every victory is a triumph in and of itself.

And every slash in the win column, is one more mark made in the pursuit of outnumbering the defeats.

Every win is a life preserver.

So when the defeats are weighing us down-

We can cling to them, to keep from sinking.

So I took that win, and I finally checked it off my list.

I tamed that dragon, and all was put right in the kingdom.

And then, the Princess had her picture taken happily ever after-

….and even tagged herself in the photo. 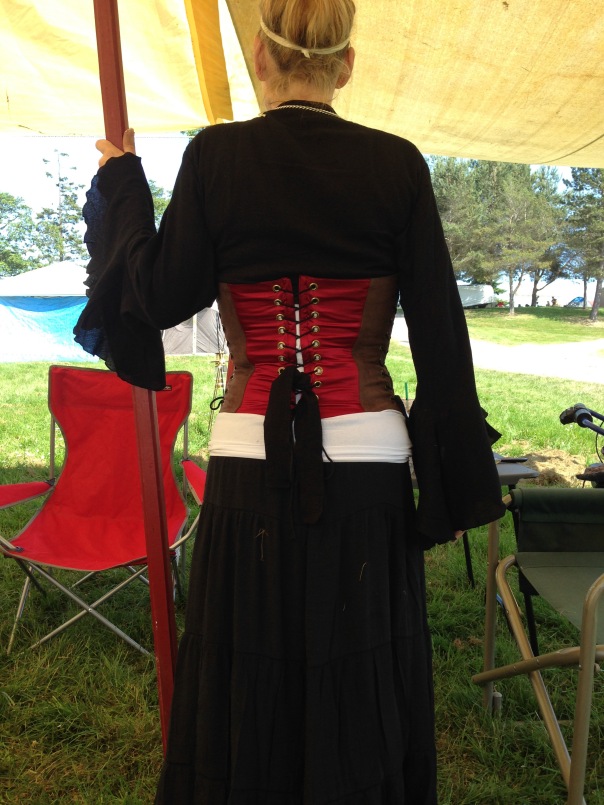 8 thoughts on “Of “Corset” Matters”