This is Fergus…and I suspect that he is on to me.

In a clandestine caper of snack-a-licious proportions, I have taken to a life of crime, and unlawfully lifted The Captain’s (my fiancee’s) coveted pretzels.

And Fergus, who is an adorable busybody, at the moment, is giving me the stare down while watching me eat the evidence.

I have stolen them, and he is the snack sheriff.

I am a thief, and he is the pretzel police.

He is Sir Fergus McFluff of the Clan McFluff, and I can feel him silently judging me.

I am trying not to make direct eye contact in effort to dissuade him. But his gaze is locked on my every move and I can see him in my peripheral vision as he watches the pretzels go from my hand to my mouth and back again.

And as I have mouthful of sourdough pretzel deliciousness, I am caught in his cross-hairs of justice, and I find myself making excuses to his sweet face to justify my pretzel-napping.

On the other hand, he might just be waiting for some errant crumbs to come flying of my mouth in his direction for his own benefit…but that would probably just implicate him as an accessory after-the-fact.

Although I’m not sure if he knows about that contingency.

He does, however, look somewhat concerned that I may crack, and throw him under the bus if I am hauled in and pressed about the pretzels whereabouts.

And now he is packing my bags and sending me on a guilt trip.

And I have decided that I feel guilty enough to pen an apology to The Captain for my crimes against him.

I will replace the pretzels, and even throw in a bag of mixed nuts- because those are his favorite.

Maybe then he will forgive me…
The Captain, not the dog.

Dammit! We are totally busted.

I went to three stores and they were all completely out of the sourdough pretzels.

And Fergus’ reaction to that news is unsympathetic. A sort of “I told you so” for snicker snacking the pretzels. He has turned his back on me, and is looking at me over his right shoulder with a flare of indignation. 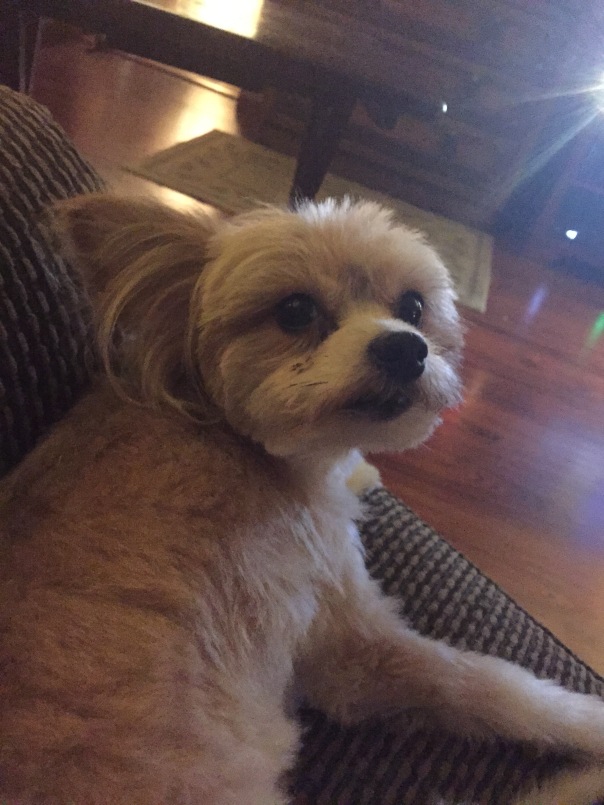 And now, he is giving me the stink eye, because I’m sure he must realize that if I’m going down, I’m taking him with me.

But don’t be fooled. He is no angel.

He is no stranger to a felonious scandal.

For, it was just a few months back, that he was caught red handed pilfering produce and fingered as the Banana Bandit, and then took a plea deal to expunge his record.

He had tried to implicate the cat in his misdeeds, and give her up as the mastermind.

The plan ultimately backfired, and now she had it out for him.

We were in this together, and he was now a party to the pretzel heist.

So in order to increase my (our) chances of leniency, I have purchased two different types of pretzels, and a whole bag of gourmet mixed nuts in a feeble attempt to leverage a little extra forgiveness from the man who has been unfairly burgled.

I mean, I know The Captain loves me, but he also really loves pretzels.

So I have also attached the following note of apology-

Confession of a Snack-a-holic

*For The Captain, (a super nice, understanding man, who loves me and does not judge)

Until my Fitbit said a snack was alright-

And while looking for something to nosh upon,

a box of pretzels came into my sight.

I tried not to eat them, but they were hard to resist,

and I said “I will only have one…”

But by the time I got, to the bottom of the box,

I knew just what I had done.

Oh how I wish, I could have stopped eating those pretzels,

I really really wish that I could-

But I was helpless against their delicious temptation,

because honestly, they tasted too good.

So I jumped in the car, and went to the store,

to buy another box in their place-

But alas, they were out, which then made me shout,

So I offer these replacements, in the hopes you’ll forgive,

Besides this apology, it’s all I can bring…

Oh…and I threw in some nuts,

because I don’t have the guts,

Now, Fergus and I are prepared to go on the run if necessary (a la Bonnie and Clyde), but hopefully, The Captain won’t be pressing charges.

However, the unsolved mystery of the disappearing carrot sticks is still an open case, and in light of some new inculpatory evidence, Fergus has been named as more than a person of interest.

He may be headed to the yard at The Big House (or the dog house in this instance). I am also pretty sure it was the bananas that did him in. The bananas were a gateway to a slippery slope.

And, unfortunately for him, it appears that there is a new sheriff in town. Beware her majesty, the long arm of the (c)law.

11 thoughts on “The Pretzel Heist”